Turretin (1623-1687) was a 17th century Swiss-Italian (although it makes more sense to me to call him Italian-Swiss) who served as both as a pastor and as a professor of theology at Geneva. The advantage of beginning with him is that his work takes us back to where Reformed theology was about two generations after John Calvin (1509-1564). 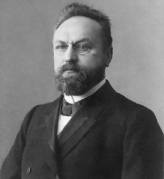 Bavinck (1854-1921) was a late-19th/early-20th century Dutchman who also had careers as both a pastor (at Franeker) and as a professor of theology (at Kampen and then Amsterdam). The advantage of beginning with him is that his work is close enough to our time that it has had a direct influence on those who shaped current confessionally-based Reformed thought (e.g., Cornelius Van Til).

Both men’s theologies are like oceans into which I’ve dipped my toes many times over the past few years with great profit. In my experience, Turretin has an uncanny knack for anticipating just about every issue that continues to nip at the heels of Reformed Christianity at the dawn of the 21st century. Bavinck, on the other hand, helpfully weaves a good deal of historical theology into his presentation. But which ocean should I cross first?

It was a difficult decision, but in the end I decided to begin with Turretin. His Institutio Theologiae Elencticae was required reading (in Latin, of course) at Princeton Theological Seminary in the 19th century until it was replaced by the Systematic Theology (Grand Rapids, MI, USA: Wm. B. Eerdmans Publishing Company, reprinted 1982) of Princeton theologian Charles Hodge (1797-1878). As for Turretin’s chosen title:

Like his great Geneva predecessor, John Calvin, Turretin entitled his work an Institutio. This word suggests foundational or basic instruction. Hence the Institutio theologiae is a basic instruction in theology. However, the term electicae or elenctic is not familiar to us. What did Turretin mean by dubbing his volume “Basic Instruction in Elenctic Theology”? Elenctics is derived from the Greek word for that which exposes error. Elenctic theology is thus polemic theology, since it is devoted to refutation of errors. But it should be noted that Turretin is not content only with refutation of error. He is positively concerned with the statement of truth as well.

Turretin would have suffered from no shortage of errors to refute in his lifetime. More than a century after the Reformation, Cardinal Robert Bellarmine (1542-1621) unsheathed his formidable pen in the service of the Roman Catholic Counter-Reformation. In the wake of the original Arminian controversy (1610-1618), Hugo Grotius (1583-1645) and Simon Episcopius (1583-1643) made a general nuisance of themselves. And then there were always the followers of Faustus Socinus (1539-1604) to deal with, along with the occasional hostile Lutheran. All of these opponents figure prominently the proper name index of this edition.

While I’m usually of the type that prefers to skip over prefaces and introductions, after glancing at “Turretin’s Preface to the Reader” (xxxix-xlii) it appears that it would be helpful use it as the point at which I raise my anchor to cross Turretin’s Elenctic ocean. That’s where I expect to be at this time next week.