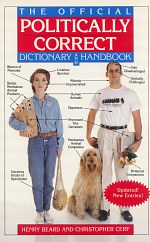 As I continue commemorating the 15th anniversary of the initial publication of The Official Politically Correct Dictionary and Handbook, by Henry Beard and Christopher Cerf (New York, NY, USA: Villard Books, updated edition 1993), which began with my post of January 3rd, it occurs to me how surreptitiously many of the words in this book have since crept into our day-to-day speech in ostensibly innocuous fashion, even to the point of assuming a place of privilege in many of our cultural institutions.

Take a simple, time-honored word that most of us grew up experiencing as part of the very fabric of our educational system: the word “test.” It took me several months—perhaps more than a year—after I broke into teaching to figure out that “test” is no longer the term of choice for the exercise we perform for the purpose of ascertaining whether children have actually assimilated the account of reality we have been attempting to shoehorn into their brains. For many people (though not for all of my generation and earlier), the word to describe that anxiety-ridden event is now “assessment.”

It sounds harmless enough, even reasonable, but how did we get it? Is it just another example of what Beard and Cerf refer to as a “Bureaucratically Suitable” (I’ll let you figure out the acronym for that!) term, or were the forces behind its coup of the word “test” more philosophical in nature?

My guess is that “assessment” is either an abbreviation of the true, politically correct preference, or perhaps a compromise term that can be embraced even by people who operate within a cultural deprivation framework (i.e., patriarchal, Eurocentric, etc.; ibid., 23). In any case, the full term is “needs assessment,” and it seems it was first brought to our attention by William Lutz in his book Doublespeak. Beard and Cerf enlighten us as follows:

needs assessment. The preferred term for “educational testing.” “Testing” is unacceptable because it places the responsibility for “shortcomings” on the student, ignoring the far more significant contribution of the educational system and, indeed, of society. Example: “Darn! I got a grade of “differently superior” on my final needs assessment,” sobbed Naomi.

But perhaps there’s more to it than that. In a world where the cognoscenti would replace the word “testimony” with “ovarimony” (ibid., 104), is it any surprise “needs assessment” or even “assessment,” as opposed to “test,” would fit nicely within an anti-phallogocentric agenda?