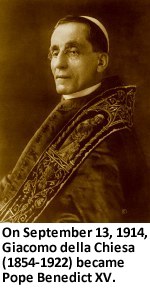 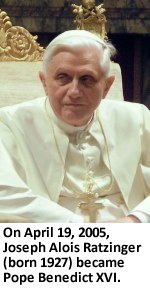 The version I read, which was written before Joseph Ratzinger became pope, goes something like this: Karl Rahner, Hans Küng, and Joseph Cardinal Ratzinger all die on the same day and go to meet St. Peter to learn of their fates. St. Peter approaches the three men and tells them that he will interview each of them to discuss their views on various issues.

He then points at Rahner and says, “Karl! In my office…” After four hours the door opens and Rahner comes stumbling out of St. Peter’s office. He is highly distraught and is mumbling things like, “Oh God, that was the hardest thing I’ve ever done! How could I have been so wrong! So sorry…never knew…” He stumbles off into heaven, a testament to the mercy of our God.

St. Peter follows him out, and sticks his finger in Küng’s direction and says, “Hans! You’re next.” After eight hours the door opens and Küng comes out, barely able to stand. He is near collapse with weakness and a crushed spirit. He, too, is mumbling things like, “Oh God, that was the hardest thing I’ve ever done! How could I have been so wrong! So sorry…never knew…” He stumbles off into heaven, a testament to the mercy of our God.

Either that joke is nearly a quarter century old or it requires us to suspend disbelief, since Rahner passed away in 1984 while Küng and Ratzinger are still alive and kicking. In all likelihood its author had no idea that one day Ratzinger would go on to be installed in the office that Roman Catholicism claims was originally occupied by Peter himself.

It’s been two years now and I am still wondering about the the name Joseph Ratzinger chose upon his election to the papacy. I am beginning to think that it is at least possible that it may be more multivalent than he originally indicated.

I do not know when there has ever been a pope who was already so prolific as a published writer of theology prior to becoming Bishop of Rome. During the generation prior to his investiture he established himself as an academician of considerable weight.

Of course, this alone does not suffice to make one’s name a household word. As someone once wrote, “Of the making of many books there is no end, and in much study there is weariness for the flesh” (Ecclesiastes 12:12, New American Bible). Such weariness sometimes blurs my mind when it comes to recalling which authors wrote what, and what their ecclesiastical connections are. So I was somewhat aware of his identity when his name was circulated as a likely successor to John Paul II, but it was only after his election that I realized I had some of his writings on my bookshelves.

It’s obvious from what he’s written that Ratzinger has a deep knowledge of and appreciation for the history and theology of his church. This is what makes me wonder whether there is more to his choice of the name Benedict than the two reasons he has stated publicly. The first of those reasons is his desire to emulate Benedict XV. As he Ratzinger put it:

I wanted to be called Benedict XVI in order to create a spiritual bond with Benedict XV, who steered the Church through the period of turmoil caused by the First World War. He was a courageous and authentic prophet of peace and strove with brave courage first of all to avert the tragedy of the war and then to limit its harmful consequences. Treading in his footsteps, I would like to place my ministry at the service of reconciliation and harmony between persons and peoples, since I am profoundly convinced that the great good of peace is first and foremost a gift of God, a precious but unfortunately fragile gift to pray for, safeguard and build up, day after day, with the help of all.

Beginning, as it did, during the post-invasion occupation of Iraq, Ratzinger clearly sees parallels between these times and those of the previous Pope Benedict. That Benedict assumed his papacy as the guns of August (as Barbara Tuchman referred to the opening salvos of World War I) continued to echo throughout Europe. He died as the seeds of World War II were beginning to sprout.

But since he is the sixteenth pope to choose the name Benedict, it raises the question of how such a tradition ever began, which he promptly answers:

The name “Benedict” also calls to mind the extraordinary figure of the great “Patriarch of Western Monasticism“, St Benedict of Norcia, Co-Patron of Europe together with Sts Cyril and Methodius, and the women Saints, Bridget of Sweden, Catherine of Siena and Edith Stein. The gradual expansion of the Benedictine Order that he founded had an enormous influence on the spread of Christianity across the Continent. St Benedict is therefore deeply venerated, also in Germany and particularly in Bavaria, my birthplace; he is a fundamental reference point for European unity and a powerful reminder of the indispensable Christian roots of his culture and civilization.

This statement seems to focus on Benedict of Nursia‘s role in church history through a very narrow aperture. It also seems to concentrate much of that focus on European identity and unity, in apparent opposition to perceived American hegemony in world affairs. Pope Paul VI did, after all, name St. Benedict the patron protector of Europe in 1964. Meanwhile Ratzinger mentions nothing of St. Benedict’s role as a reformer, perhaps because he believes that “liberals hijacked the church on a false reading of [the reforms of] Vatican II,” and now the very word “reformer” is associated with things he is working to correct (see “The Vatican’s enforcer,” in the National Catholic Reporter, April 16, 1999).

But let’s go back to that “spiritual bond with Benedict XV” that Ratzinger desired to create. Just who was this early 20th century pope that makes him such a desirable role model? According to British Catholic historian Paul Johnson, “Unlike his predecessor [Pius X], Benedict XV