Today the world of New Testament scholarship mourns the passing of a true giant in that field, Dr. Bruce Metzger. He died yesterday at the age of 93. He was a translator of Scripture and a prolific author of significant scholarly texts. He made important contributions to our understandings of the canon of Scripture, its content, and its background. But he will go down in history for his vast labors in the unglamorous but essential field of the textual criticism of the New Testament.

Detailed discussions about which variant manuscript reading for a given biblical text should be considered authentic do not tend to draw huge crowds. And it’s difficult to imagine anyone spending long hours poring over hundreds of ancient manuscripts and the data concerning them to determine whether there is more support for τῶν λόγων τούτων (“these words”), τῶν λόγων αὐτοῦ (“his words”), αὐτοῦ τῶν λόγων τούτων (“these words of his”), or one of six other choices to be found within the manuscript evidence for John 7:40. But not only did Metzger spend a large portion of his life doing just that, he actually recorded and published the rationale behind each of the hundreds of textual choices made by the editorial committee for the United Bible Societies‘ Greek New Testament. 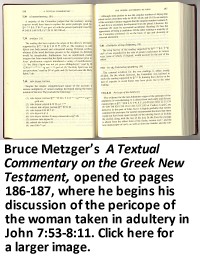 The list of books that I would never want to be without is not very long, but Bruce Metzger’s A Textual Commentary on the Greek New Testament, 2nd edition, (Stuttgart, Germany: United Bible Societies, 1994), occupies a prominent place on it. Often I find myself needing more textual information than I can find in the critical apparatus of my Greek New Testament, or in a standard commentary, and when I do I inevitably find myself reaching for this gold mine of information. If this amazing book had been the only work Metzger had ever produced it would have earned him the undying gratitude of New Testament scholars for decades to come. But he left us so much more.