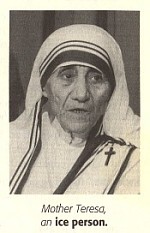 ice people. The European-American descendants of northern Ice Age peoples. The term was coined by Dr. Leonard Jeffries, chairman [sic] of the Afro-American Studies Department of the City University of New York, who theorized that humanity is divided into two principal groups, “ice people” and “sun people” (Africans, Asians, and natives of Latin America and the Caribbean). The two groups have